By Jinny Taylor on Wednesday, July 11, 2018
Spain finished top of Group B on the “goals scored” criteria, after a frenetic final few minutes in both games. The 2010 champions were trailing a spirited Morocco side 2-1 as we entered injury time, while Portugal held a slender 1-0 lead over Iran. 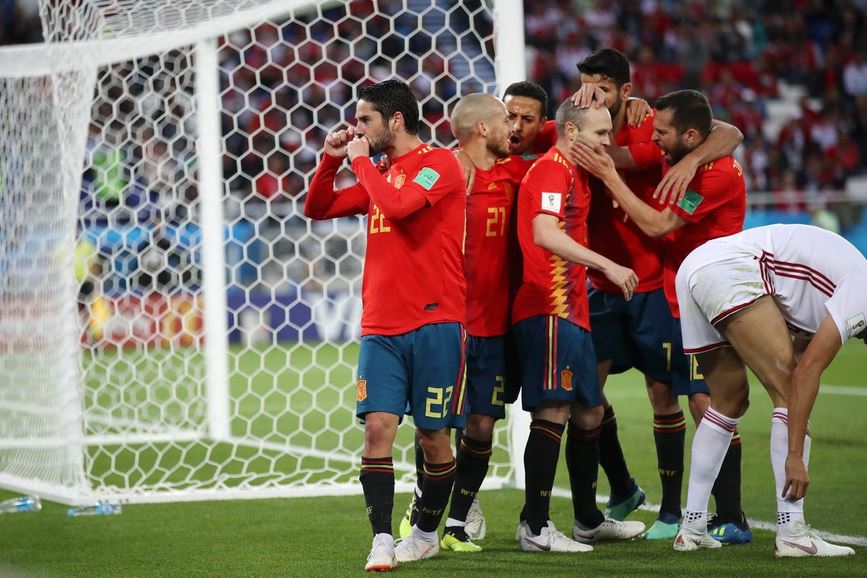 A minute into added time, Spain took a quick corner, and substitute Iago Aspas finished in style to draw his side level. They needed a huge favour from Iran to overhaul Portugal though, and got just that two minutes later. The Asians were awarded a penalty following a handball caught by the VAR (video-assisted referee) system. Karim Ansarifard converted, and suddenly, the two European teams were level on points at the top.Spain and Portugal had identical records coming into the last round of fixtures. They had played out a thrilling 3-3 draw in the opener, before recording 1-0 wins in their second match. Had their scorelines in the third been exactly the same, we would have depended on the Fair Play table to act as the tie-breaker. Spain, for all their intricate passing and interplay, have struggled to create clear-cut chance in the tournament so far, and that trend continued here in Kaliningrad. Khalid Boutaib gave Morocco the lead in the 14th minute when he raced through and finished through David De Gea’s legs. The Manchester United keeper will feel he could have done much better, as his disappointing tournament continues. Spain struck five minutes later and it was the veteran genius of Andres Iniesta that weaved past the Moroccan defence before cutting the ball for Isco to finish high into the net. The second half was end-to-end, and it was impossible to pick a winner. Nordin Amrabat hit the angular crossbar and post, before Isco had a header cleared off the line. With less than 10 minutes to go before the 90, the Africans got the breakthrough. Substitute Youssef El-Nesyri met a corner with a bullet header that perched itself in the top corner of De Gea’s net. This time he has no chance whatsoever. Facing a humiliating defeat, Spain stuck into their full bag of tricks. With the Moroccan players still organizing themselves, they played the corner into the box, and Aspas was on hand to finish from Dani Carvajal’s cross. In Saransk, it wasn’t one of Cristiano Ronaldo’s best nights in a Portugal shirt, as he struggled to break the shackles and also missed a penalty early on in the second half, which could have sealed both the game and top spot for his country. It was Ricardo Quaresma who broke the deadlock on the cusp of half-time, with a delightful effort with the outside of his right boot from the edge of the box. Iran needed a win to qualify, and huffed and puffed their way to trying and getting a goal back. In the end though, it was a step too far. They can be extremely proud of their effort and go home with their heads held high. In the end, they only finished a point behind both Spain and Portugal, with a record of one win, one draw and one loss.Spain will now play hosts Russia in the round of 16 on Saturday, while Portugal take on Group A winners Uruguay.Author Bio:This news is proudly brought to you on behalf of Boxofficeevents.com, who are authorized dealer of football tickets in UK